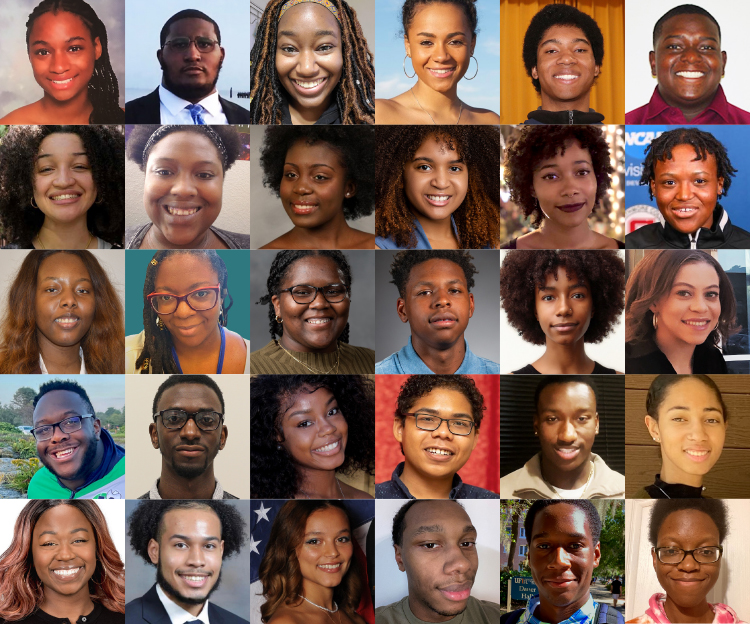 WASHINGTON, Dec. 21, 2022 – TEAM-UP Together is pleased to announce its first cohort of scholars, 31 African American students who will each receive $10,000 for the 2022-23 academic year. The scholarship program aims to reduce financial barriers that prevent many Black students from completing their undergraduate education in physics and astronomy.

“Growing up I always longed to see a scientist that looked like me. Although I didn't have the resources, I did whatever I could to learn more about the field I was so passionate about,” said Ayanna Mann, a TEAM-UP Together scholar pursuing a physics degree at Howard University. After graduating, Mann plans to earn a doctorate in astrophysics, and she believes this funding will help prepare her for that future.

“This is my primary motivator for wanting to obtain my PhD. I will not only be pursuing a career I love, but I will also be changing my community's perspective on what their life can be.”

“These students have demonstrated their passion and drive for physics and astronomy, and we are thrilled to celebrate their achievements while helping to ease some of their financial burden,” said Arlene Modeste Knowles, TEAM-UP Together project manager. “This is an exciting step toward our goal of doubling the number of African American students earning bachelor’s degrees in physics and astronomy by 2030.”

"We are delighted to partner with TEAM-UP Together to fund these scholarships that will provide the personal and financial support students from under-represented groups need," said David Spergel, president of the Simons Foundation and of Simons Foundation International. “We are also excited to support, through TEAM-UP Together, physics and astronomy departments that are putting real change in motion at their institutions to diversify science.”

For decades, the percentage of African Americans earning degrees in physics has been egregiously and persistently low—reaching just 3% in 2018 according to an AIP survey. To address this issue, TEAM-UP Together is comprised of two programmatic elements. The initiative supports students throughout their undergraduate journey and academic departments who implement programs to effect systemic change.

In addition to direct funding, this game-changing, equity-focused initiative will provide undergraduate scholars mentorship, research experiences, and a supportive community in which to thrive academically and to connect with others.

Awardees come from undergraduate institutions across the country, including seven Historically Black Colleges and Universities and one Predominantly Black Institution. Ten of the students are majoring in astronomy and astrophysics-related disciplines, while 21 are physics majors.

Recipient Alana Thigpen, a second-year student in astrobiology and biogeosciences who wants to explore extraterrestrial mining to combat environmental pollution on Earth, pushed herself out of her comfort zone to attend Arizona State University.

“This award means a lot to me because I’m an older sister,” she said. “I’m trying to show my brother that even though our high school didn’t offer that many opportunities and a lot of people stay home when they graduate, that you can go somewhere. You just really have to put the drive and effort into it.”

Likewise, Derod Deal, also a 2022 recipient, is majoring in astrophysics at the University of Florida. His passion for exploring the nature of our universe and support from mentors have put him on the path toward graduate school.

“When times get rough, it is important to revisit your core beliefs as a person and have the grit to accomplish what you want to do,” said Deal. “Receiving this scholarship confirms that I have to keep going and push through boundaries to become a better scholar.”

Applications for the next round of scholarships are due March 15, 2023. Further details on application and selection criteria can be found here. Students are eligible to apply for multiple years of funding.

TEAM-UP Together is a collective action initiative led by the American Association of Physics Teachers, American Astronomical Society, American Institute of Physics, American Physical Society, and Society of Physics Students to support the scientific community to take the next bold step in doubling the number of African American students earning physics and astronomy bachelor's degrees annually by 2030. To learn more, check out teamuptogether.org. TEAM-UP Together is aligned with a number of bold initiatives being undertaken by these partners and other AIP Member Societies and AIP Affiliates to address underrepresentation and inequity in the physical sciences.

TEAM-UP Together has also recently been recognized by the White House as one of the commitments in the national strategy to drive transformative equitable change in the U.S. STEMM ecosystem. As a result, the AIP Federation was selected as a founding member of the U.S. STEMM Opportunity Alliance, which aims to bring together organizations and entities from across sectors and scientific communities that are committed to developing and advancing a national strategy for achieving shared goals for equity in STEMM.